GDE & the Theory of Planned Behaviour

In this article I want to discuss where the GDE comes from and show that it is based on an understanding of how people intend to behave and what sort of things can get in the way of them actually behaving in the way they intend. The Theory of Planned Behaviour sets out the factors that predict behaviour and shows how there is a gap between intended behaviour and actual behaviour which can only be closed through self-awareness and self-responsibility. This diagram is a representation of the Theory of Planned Behaviour. 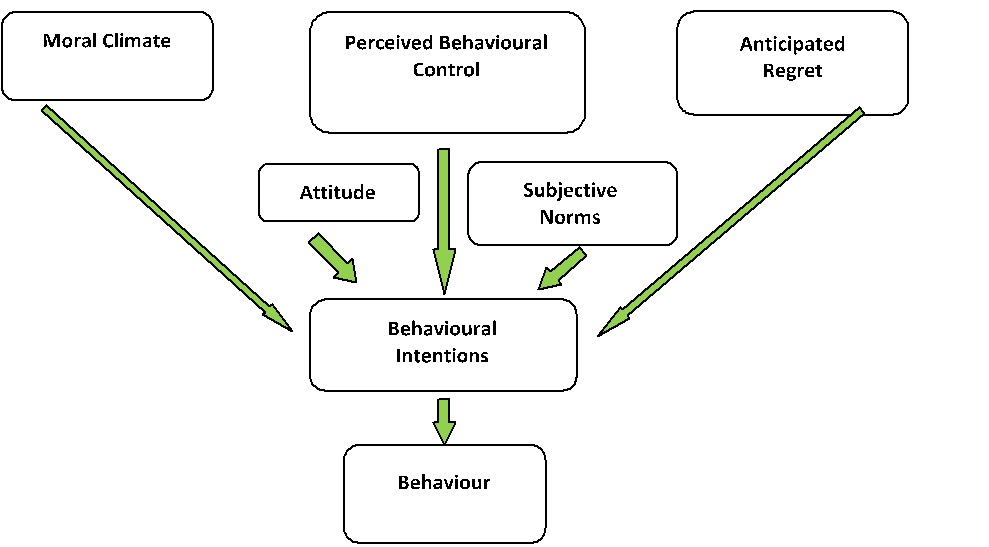 The Theory of Planned Behaviour (TPB) is the most popular theory underpinning driver behaviour. It started out as the Theory of Reasoned Action (TRA) and was developed by Ajzen and Fischbein in 1980. TRA said that Attitude and Subjective Norms are predictors of Behavioural Intention, which in turn predicts Behaviour.

Attitude is a state of mind that is reinforced by experience. Attitudes may change based on experience and will be in accordance with beliefs. For example, someone’s attitude to speeding might be that they will drive as fast as they are able - there’s nothing wrong with it and it gives them a thrill. This attitude might be based on the belief that they are invulnerable, highly skilled and able to cope with anything that gets in their way. Or, someone might have an attitude to seatbelts, which is that there is no point in wearing them – they take time to put on, twist regularly and restrict movement, as well as crumpling their clothes. This attitude might be based on the belief that seatbelts cause more harm than good and this belief could have been acquired because a friend of a friend of a friend was involved in a crash and thrown clear of the wreckage because he didn’t have a seatbelt on. If he had been wearing a seatbelt he would have died.

Subjective Norms are the result of social / cultural norms, which are an implicit set of rules by which we are expected to behave. These are the result of stereotypes and expectations which influence our behaviour. For example, if we were in a restaurant having a meal we would behave differently from if we were at a barbeque. There are rules that we understand. If you drive for work you might drive differently from driving with your family. We adapt our behaviour according to the people we are with.

In 2006 Connor and Armitage added Anticipated Regret into the mix. This is about Reflection – making people think about consequences. The degree to which you are able to anticipate regret influences the choices and decisions you make.

Connor also added Moral Climate, which is a shared belief about right and wrong. In terms of driving we can see a shift in the moral climate over, for example, attitudes to drinking and driving or speeding.

Here’s an example of how the TPB works.

Stacey is 19, goes to university and owns a car, which her parents bought her when she passed her test. She has a good group of friends, who are generally moral and well-behaved. She likes sport, boys and going out. Stacey believes that anyone who drinks and drives is stupid (Attitude) and this attitude is shared by her group of friends (Subjective Norms). She would be so ashamed if she was ever caught drinking and driving and knows that her parents would be very disappointed in her – they would probably take away her car (Anticipated Regret). In any case, she is too scared to drink and drive because of the New Drivers Act and she wouldn’t want to lose her licence (Perceived Behavioural Control). Therefore, her behavioural intention is never to drink and drive.

On one occasion Stacey drives to a party where she and her friends are going to stay the night. She will be driving home in the afternoon of the following day so decides it will be fine to have a few drinks. At the party there’s trouble and she considers what would be the most sensible course of action to take. She has another deeper seated attitude, which is that drinking in moderation and driving is ok. She has gained this attitude over the years as a result of seeing her father do this on special occasions. On family meals, two or three times a year, they go out into the country and her father has always had four or five large glasses of wine with his meal and then driven home. No one in the family has ever mentioned this or, in any way, suggested that this is inappropriate behaviour. Usually, Stacey’s attitudes are most influenced by her Subjective Norms from her group of friends. However, she is frightened by the fighting and arguing and the general threat to their safety, so she convinces her friends that the safest course of action would be to drive home. At the moment when she makes this choice she also believes that her parents will congratulate her on being sensible and removing herself from the danger (Anticipated regret).  She forgets that the Christmas drink drive campaign is on and when she gets stopped she blames the timing of the party – if she had been stopped a week earlier she’d have been fine (Perceived Behavioural Control).

The Theory of Planned Behaviour shows us that there is a gap between how we intend to behave and how we actually behave and that the gap between intention and actual behaviour is influenced by our attitude, subjective norms, ability to anticipate regret, the moral climate and our perceived behavioural control. The GDE is simply another way of looking at this and sets out what needs to be addressed in order that the individual can take greater responsibility for their choices and actions.

What if Stacey hadn’t been stopped by the police and instead had lost control of the vehicle, come off the road, and ended up killing her friends in the car? What options did she have? Did she understand the possible consequences of her actions? Could she have rung her parents, or called a taxi, or the police? What made her think that driving was a reasonable risk to take? Exploring these kind of questions during the learning to drive process means you are addressing the higher levels of the GDE (Level 3 – Goals and context of the journey; and Level 4 – Goals for life and skills for living) and this then empowers newly qualified drivers to take responsibility and make safer choices based on an understanding of how the way they think and feel affects their behaviour.